“A phenomenon” (Le Monde) “This young woman personifies the arrival of percussion on the classical stage.” (Le Figaro) “A stunning percussionist” (Télérama) “She has a bright future” (Classica) “A star of classical percussion” (Radio Classique) “An impressive flair” (The Times)

Winner of several international prizes in France and abroad, Adélaïde also received the award of Revelation Soliste Instrumental at the 24th Victoires de la Musique Classique, becoming the first percussionist to be nominated for an award at this event. 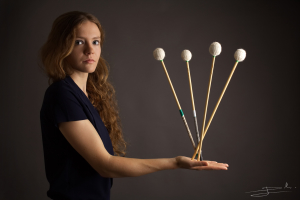 Born to a family of musicians, Adélaïde began learning the piano and percussion at the Conservatoire of Dijon, before winning a place at the Paris Conservatoire at the age of 15. She completed her Masters in 2017, graduating with highest distinction. She also studied at the Royal College of Music (London) in 2016.

Adélaïde Ferrière has participated in numerous world premieres, and has worked with composers such as Philippe Hurel, Thierry Escaich, Martin Matalon, Hugues Dufourt, Alexandros Markeas, Camille Pépin, JeanPierre Drouet, François Narboni, Mikael Karlsson, Éric Sleichim, John Palmer, and John Psathas as well as the choreographer Alexander Ekman (world premiere of the Play Ballet at the Paris Opera in 2017) and the stage director Ivo Van Hove (world premiere of the theater piece Électre/Oreste at the Comédie Francaise and the Ancient Theater of Epidaurus in 2019).

Adélaïde Ferrière is a Yamaha and Kolberg Artist. Her arrangements are published by Edition Svitzer in Denmark. She is also supported by the Adami, Safran Music Foundation, and the Engelberts Swiss Foundation.